Why cats and boxes are such a good mix has long been a mystery. Now researchers from the University of Utrecht have discovered just why, publishing the results of their findings in the journal Applied Animal Behaviour Science.

In their study, the researchers aimed to determine if boxes can help in alleviating stress in shelter cats. Felines have long had an affinity for enclosed cardboard structures so researchers explored just what would happen if shelter cats were exposed to boxes. In a Dutch animal shelter, 19 new shelter cats were identified and randomly assigned to either get a box or not get a box. Ten were given cardboard boxes; 9 did not get one.

According to results, those cats with boxes exhibited faster recovery ability and also adapted to their new environment more quickly compared with the group without boxes, with significant differences recorded just three to four days into the study. 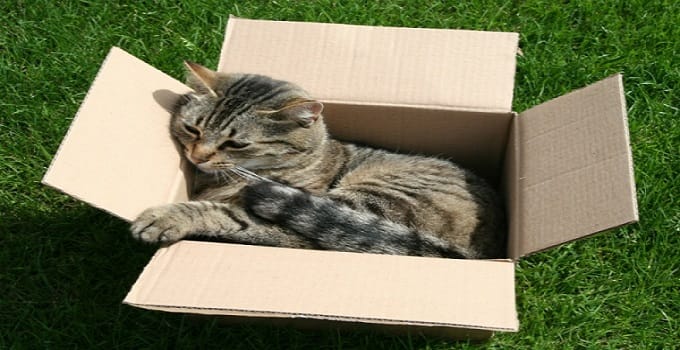 There is now an official (and scientific!) reason why cats love boxes. Researchers have confirmed that cats take a liking for enclosed cardboard spaces because it aids in lowering stress.

“Stressful experiences can have a major impact on the cats’ welfare and may cause higher incidences of infectious diseases in the shelters due to raised cortisol levels causing immunodeficiency. Though several studies showed preference for hiding places and stress-reducing effects of hiding boxes on cats in combined studies, none of these studies determined if proper hiding enrichment would be effective in a quarantine cattery,” explained the researchers.

To assess the cats, researchers used the Kessler and Turner Cat-Stress Score during a 14-day study period. The results showed that the cat group with boxes registered mean CSS lower than their counterparts without the boxes, which meant they had lower stress levels.

There was also minimal difference in the scores reported for each cat individually within the group with boxes while those without boxes showed a higher variance. Both groups managed to have the same CSS by the end of this study but in terms of recovery, the group given boxes were already well off by the third day. These findings led these researchers to conclude that being given a box to hide in allows a cat to recover in a new environment faster by keeping stress levels down.

As a next step in research involving cats and boxes, it may be explored how taking a box and hiding it factors in on housed cats and what long-term effects having access to a hiding box might have. Additionally, research may also soon be done on the role of hiding boxes in infectious disease outbreaks in cats.