The Cat Boat is one of Amsterdam’s most peculiar attractions. It’s basically a sanctuary for cats, but what makes it unique is that all the rescued cats that live aboard a special little houseboat which bobs along the Herengracht canal. Although it wasn’t intended initially to be a tourist attraction, The Cat Boat attracts around 4,500 visitors a year, most of whom are tourists who just so happen to be missing their own cats while on vacation!

The origins of the Cat Boat can be traced back to the year 1966, when a kind woman named Henriette van Weelde took pity on a stray feline and her kittens and allowed them to stay at her own home. Henriette soon became well known in the neighborhood for her kindnesses; people would regularly drop off rescued cats at her doorstep and she would never turn one away.

This went on for just about two years, after which Henriette simply didn’t have enough room to house more cats. So she came up with a great solution – she put them all on an unused houseboat on the nearby Herengracht canal. The feline sanctuary was something of a ‘pirate’ ship for just about two decades, operating without the knowledge of the authorities. But in 1987, it finally obtained a permit and was officially christened ‘de Poezenboot’ (the Cat Boat). 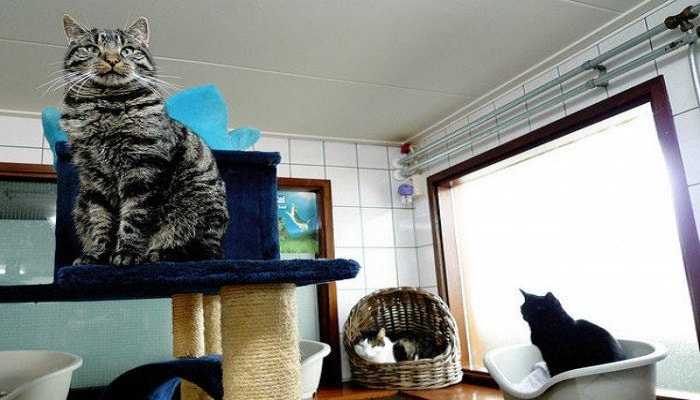 The rescue boat served as a safe haven for stray and feral cats in Amsterdam for decades, with Henriette caring them until her death in 2005. It is now run with the help of a very small staff and just a few local volunteers. On any given day, you can find around 50 cats “hanging out” around the ‘world’s only floating cat hospital’, of which at least 14 of the cats are permanent residents. The others may be adopted. 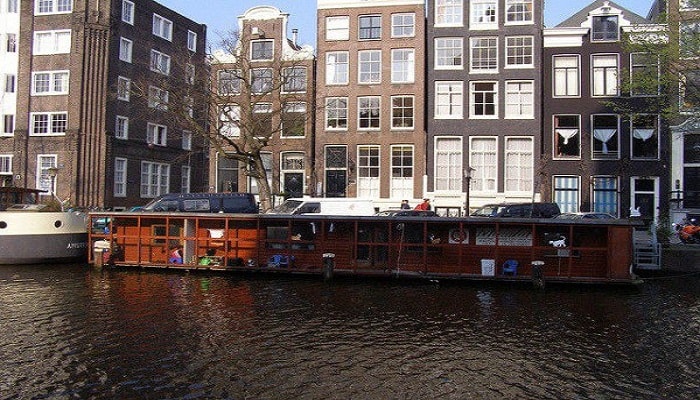 “Most of our permanent residents started out as feral cats who by now can never be fully socialised,” explained Judith Gobets, a staff member on Cat Boat. “They will never be ‘normal’ cats and will always distrust people. Some you can pet, but don’t try to pick them up.” To help visitors identify the cats they need to stay away from, they have drawings of the ‘dangerous’ ones posted all over the boat. “Of course they are not really dangerous,” Judith adds. “You just have to leave them alone. People always like to cuddle a cat, but often that’s not what the cat wants.” 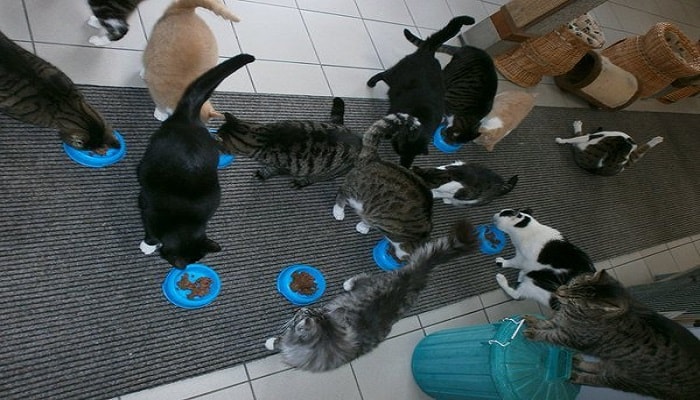 Each and every new cat is quarantined in cages for a small period of time, during which they are neutered and of course, implanted with microchips. This is an attempt to ultimately minimize the feral cat population, and prevent any adopted cats from running away or being abandoned. 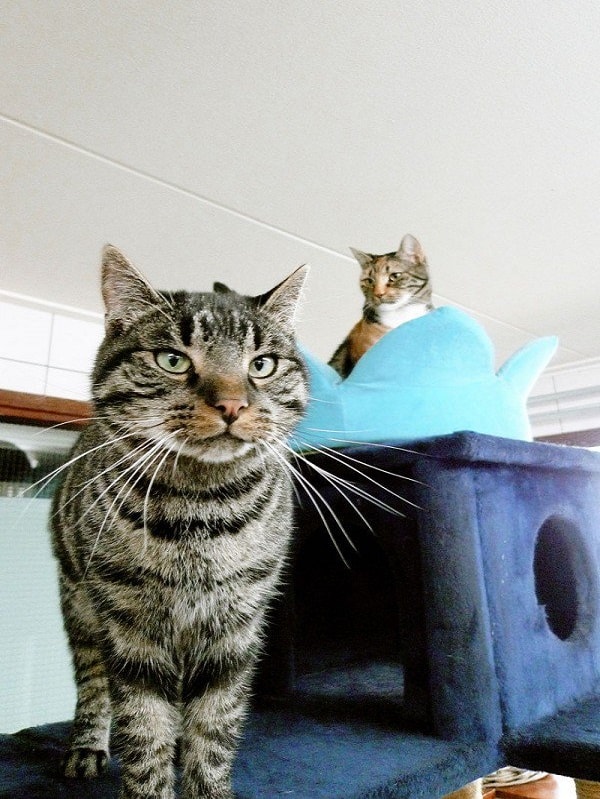 Later, the ‘adoptable’ cats are then allowed to roam freely on the boat – they’re perfectly friendly and adorable, but it isn’t very easy to actually just take one of them home.

“We are very picky about adoptions,” Judith said. “I really have to have the feeling that the match is perfect. Otherwise the chance is too big that the re-homing will fail. Potential new owners and the staff have to sleep on it for a night before we finally say yes.” 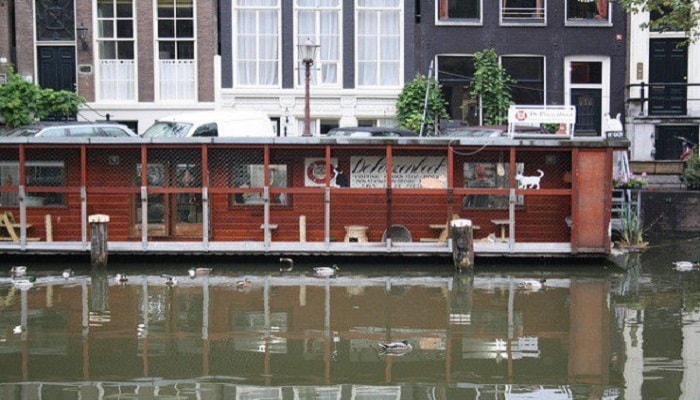 “We are very strict with the placement of cats,” added volunteer Sandra, speaking to Vice Magazine. “We don’t want them to return to us, so we ask potential new owners a lot of questions about the home situation and their experience with cats. If someone things a cat is only fun and nice to cuddle and play with, we tell them it takes a lot more to take care of a cat.” 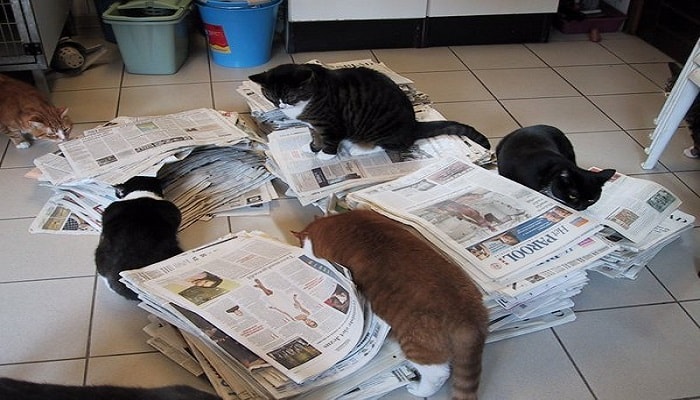 While they’re waiting to be adopted, the cats do have plenty of things to do to keep themselves amused. For instance, the families of ducks, swans and gulls that paddle by on the canal.

“Some of our cats like to peer through the fence at the ducks, dreaming of ways to pounce,” Judith revealed. “Cats of course, like to hunt.” 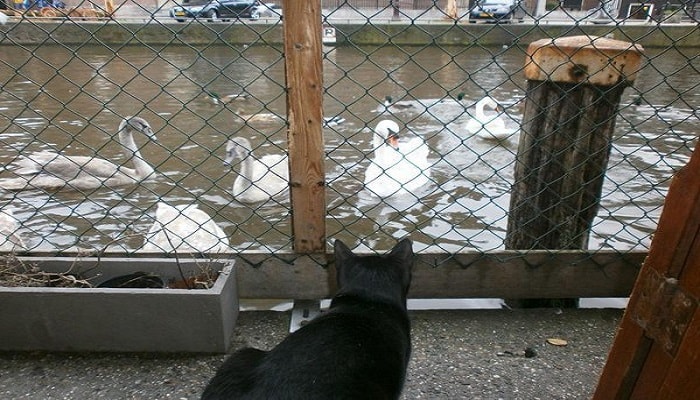 “The ducks and swans like the cat food and swim next to the boat begging for some food,” Sarah said. “You would not see cats and ducks this close to each other normally. [They are] separated by a fence, of course.” 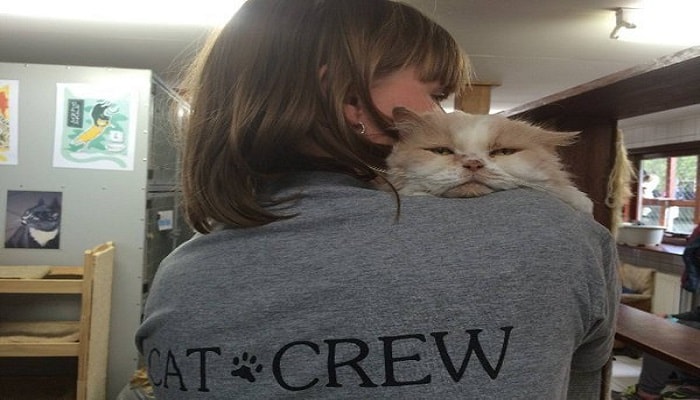 A boat full of cats must have a CAT-ptain, of course, and according to Sarah, that title belongs to one of the male cats named Koeienkat (cowcat).

“He is a dominant male and needs to be fed first or separately, otherwise others wouldn’t get any food! He mostly sits next to the door where the visitors come in and looks like he would like to be petted. But that’s only appearance, he will scratch when they try to do that. He is well known and loved in spite of – or maybe because of – his character.”

Visiting the Cat Boat is free of charge, but most tourists do tend to make generous donations when they come to know that it does not receive government support. Cat lovers from across the world also make online donations to help support this boat’s permanent residents.

“About 10 years ago we did apply for funding, but they turned us down,” Judith said. “From that moment on we’ve gone our own way. We are supported entirely by donations. And we do like the feeling of being independent. No strings attached.”